We recently began the journey to get our RV-6 certified for limited aerobatics. The process initially looked daunting but has not seemed unduly time consuming, rather, a thorough check of various key features of the aircraft to ensure that it is safe and ready to be thrown around.

The RV series are marketed as ‘sport aerobatic’ aircraft, which is a definition not formally used by the FAA or UK CAA. Basically, RVs are designed as touring aircraft but their speed, control harmony and responsiveness lends them to be competent basic aerobatic aircraft. You wouldn’t want to buy an RV to compete year round in; they just aren’t built to do that. But if you want an aircraft that you can enter a loop from whilst at cruise speed and maybe thrown a few figures over the field at the end of the day then a number of the RV models are apparently good at this.

Some say the tandem models (4 and 8) are the best, whilst others say the lower the model number, the better they fly.

As each RV is built differently the LAA require that aircraft are cleared for aerobatics on an individual basis. This makes sense as there are dozens of different engine, prop, wingtip, battery locations and other equipment combinations.

The RV-6 is limited to 1375lbs max weight for aerobatics. With our aircraft this means 75 litres of fuel and one adult is all you can get in to stay within this weight limit. We are ‘safe’ to pull +6 to -3G but this does not mean that we will; and don’t for a second think that you can safely add a second body, less fuel and be safe to pull say 2.5G max – it doesn’t work like that. For fatigue we will probably limit acceleration to 3G in normal aerobatics.

There are many YouTube videos of RV-6s being flown two up for aerobatics. That’s fine and, ultimately, your call to make. If you built the aircraft and can satisfy yourself that it can cope with it, then go nuts.

We may explore one exception in the future; an aileron roll shouldn’t put any real stress on the aircraft as if it is done correctly it should be a 0.5-1.5G manoeuvre. We think that this might be acceptable to perform with two people on board, but we will not fly any positive G figures above the 1375lbs limit.

Intentional spinning is prohibited in the RV-6 and RV-7 but is one of the main factors the inspector looks at when performing the flight test. The standard RV-6 has a smaller rudder and wingspan than the 7 or 8 and therefore spin recovery can be slightly different.

First on the list was an accelerometer. We opted for a Falcon +10/-5G model from LAS Aerospace, which was delivered next day with zero fuss. Fitting was easy as the 2-1/4” face fitted perfectly in place of a disused clock on the instrument panel, right in front of the pilots face. The screws used in the clock were slightly too short for comfort so I opted to use 20mm M3 screws and nuts from ScrewFix to get a better fit. I may upgrade these to M4 size with nylon locking nuts in due course. 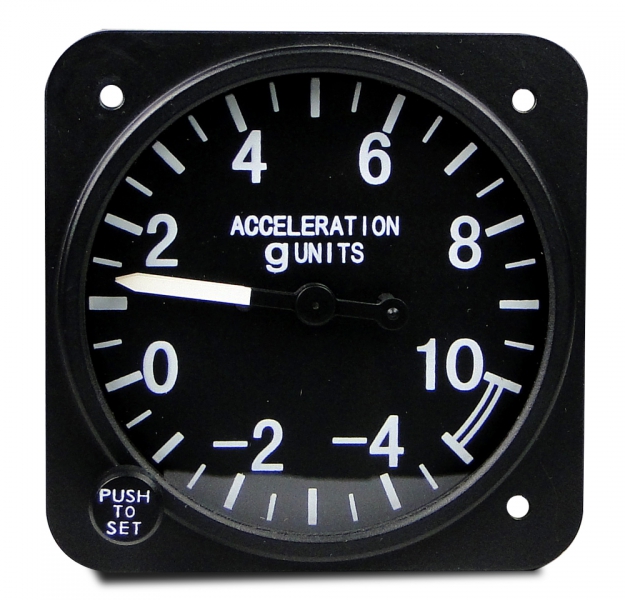 Next up was a placard detailing the various limitations, spin recovery technique as well as approved figures and their entry speeds. You really can loop an RV from the cruise, no more diving toward the ground with the throttle fully open! I threw a placard together in InDesign to keep us going until I order some FlyVisuals placards for the whole panel.

I brought the engine red line even lower than it actually is (2,600rpm) just to be even safer. We want aerobatics to be fun, we’re not trying to break records (or engines) in the process.

Following on from this we work through the application form (LAA 181A/07), listing the engine, prop, various systems like inverted oil (no), fuel flop tubes (no)*, pressure carb (no)* and other factors like wingtips, wing root fairings etc.

* our engine will stop when it’s upside down or in a negative G manoeuvre.

We must also check control surface travel limits to ensure that they conform to those listed by Vans for the RV-6. To help with this I made a simple protractor on thick card to slide in between the control surface and the wing/tail/horizontal stab, and read off the figures. The highest travel of any surface is the rudder at 35 degrees left and right.

We’ve had the paperwork signed by an LAA inspector and provisionally spoken to a recommended flight test pilot for the spinning and aeros test. Now we wait to hear from the LAA, whilst vacuuming the entire inside of the aircraft, removing any loose bits and pieces and stock up on oil as we’re bound to lose a bit from now on!

The week finally came and the aircraft has looped, rolled, avalanched, spun and more! I flew down to West Sussex and met with Will Greenwood from Classic Warbird Displays who did the flight test.

Wind back a week and we’d received the documentation from the LAA to conduct the flight test.

I emptied the aircraft of everything except for the PLB as well as seat cushions (Will wore a parachute). It had been vacuumed and cleaned the day prior. Aiming for a max aerobatics gross weight of 1375lbs we weighed Will and then topped up the fuel load (which ended up being around 75ltrs). You could fly with one adult (me) plus a very small person and probably 40lts but that is pushing my personal limit on fuel in the tank.

Will took the aircraft over the South coast and, through his new 8.33 base station in the hangar, proceeded to talk to me as he started and completed each element of the test (mainly to reassure me that all was okay).

The flight went as hoped and no vices were found, save for the RV’s usual tendency to spin much faster to the right than the left. No appreciable oil loss was noticed.

We are debating the use of a parachute. As we will be flying aerobatics solo, it is likely that we will go flying with the sole intention of doing aeros, so it’s not like a parachute is going to get in the way on cross country flights etc. I would like one.. I’m still in my 20s!

Paperwork filled in, we sent it all to the LAA today (19th) and wait with anticipation for Francis Donaldson’s feedback!